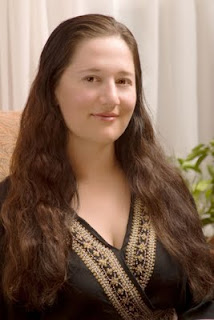 Where do you live: I currently live in New Jersey, the Garden State, although near my
house there aren’t many gardens.

What you do as a vocation or avocation? I teach creative writing at Ocean County College.

Your two favorite books: I’m awestruck by the beauty of Jhumpa Lahiri’s writing. Her
book, The Interpreter of Maladies, is one I continue to reread in hopes of learning her
secrets of storytelling. Another stunning book is Lying Awake by Mark Salzman; he
explores the complexities between madness and the divine.

Your two favorite songs: I’m an unabashed devoted fan of The Smiths. The song “There is a Light That Never Goes Out,” is one that, decades later, still gives me chills. My other favorite song sung by Morrissey is “Cemetry Gates.” Not too many pop songs include Keats, Yeats, and Oscar Wilde all inside one song."

Why you are interested in spirituality? My involvement in spirituality began before I was born. It was my parents who, like so many seekers in the late 1960s, were actively searching for a teacher to guide them down a spiritual path. When they found Sri Chinmoy, a newly arrived guru from India, in New York City, they believed that he was the true holy man they had long sought. Sri Chinmoy married them in a ‘divine marriage,’ and initiated them as his disciples. The guru quickly turned the informal spiritual path into a rigorous cult, setting rules and demanding absolute obedience. One of his new rules was that all disciples—even married ones—were to be celibate. Shortly after my parents’ wedding, my mother became pregnant—a clear violation of the rules. While the Guru was initially angry at my parents’ disobedience, he later created a story that he was going to transform their mistake into a blessing. He claimed that he chose from the highest heavens a special soul to incarnate on earth as his dearest disciple; I was to be his perfect devotee, and my life was ordained to serve him. For twenty-five years, I lived in his inner circle, struggling to fulfill my imposed role. As a disciple, I was supposed to obey and surrender to his will and follow his orders. No matter how hard I tried, Sri Chinmoy’s version of what constitutes a spiritual life, never felt right. I didn’t want to shun the world, avoiding relationships with the ‘outside.’ Eventually, after multiple attempts to follow my own path, I was banished from the guru’s ashram. Since then, I have been very cautious about believing anyone who claims to have the answers to a true spiritual life. Instead of following someone else, I lead myself.

Your favorite quote: "The minute I heard my first love story I started looking for you, not knowing how blind that was. Lovers don't finally meet somewhere. They’re in each other all along." --- Jalal al-Din Rumi

Your hero? My mother. I’m in awe of all that she has been through and all that she does. She literally is a person who never stops thinking about and helping others. She’s ceaseless in her ability to love.

A spiritual lesson you hope to learn? I would like to learn more patience. I’ve always been quick to plunge into irritation when a situation requires patience. Luckily, I’m getting lots of chances to practice learning patience because I have a baby daughter who is determined to take on the world in her own way.

A place in the world where you feel spiritually "connected?" Wherever I go with my daughter becomes an incredible place of wonder, a place of joy. Everyday, she teaches me how to be more connected to the world.

(Editors note: Jayanti is author of Cartwheels in a Sari, which you can see in our a-store below, and you can read more about her work at www.jayantitamm.com)

Posted by www.spiritualbookclub.com at 12:46 PM