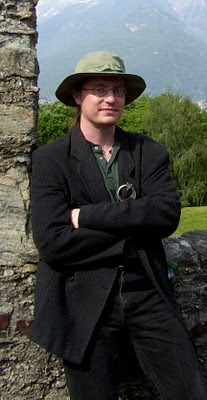 Where you live: Ottawa, Ontario, Canada; I am originally from the village of Elora, also in Ontario.

What you do as a vocation or avocation?
I am a philosopher. This is partly my career for practical purposes, as I am presently employed as a professor at a small college in Gatineau, Quebec. But it is also my ‘calling’. To live a meaningful and worthwhile life, one needs to be thinking and reasoning about the highest and deepest things in life. So in addition to teaching at my college, I also serve my local spiritual community as a researcher and workshop leader, and I publish books on philosophical and spiritual topics. Writing these books requires intense introspection, and a will to preserve one’s humanity, integrity, and wonder. Therefore writing them may be more important than publishing them. If there was no audience for my books, I would probably still write them.

, because it is so rich with provocative parables and thought-inducing questions; and The Collected Poems of W.B. Yeats

, because his work is so evocative and lyrical, yet also honest about the human condition. It’s difficult for me to choose just two. I have a private library of over 500 books of philosophy, myth, and spirituality, and of these I tend to return to a dozen or so fairly regularly. But these two are the books I have been turning to most recently.

(the whole album, not just the one song) by The Waterboys, because it reminds me of my time in Ireland; and  Sympathy for the Devil,

by The Rolling Stones, because it is one of the most honest songs about religion ever composed.

Why you are interested in spirituality?
When spirituality is approached and undertaken properly, it can lead to a truly sustainable peace of mind, and sense of confidence, and sense of the goodness of being alive on Earth and being who you are. Rational self-examination, as numerous philosophers have affirmed, leads to the truly worth-while life. We find this view in the dream of Boethius, who while wasting away in a prison, condemned for a crime he didn’t commit, dreamed of the goddess Sophia telling him: “Why do you mortal men seek after happiness outside yourselves, when it lies within you”? Cicero noted that neither pain nor pleasure, neither good fortune nor bad, can unseat the rational person’s peace of mind: “philosophy will ensure that the man who has obeyed its laws shall never fail to be armed against all the hazards of fortune: that he shall possess and control, within his own self, every possible guarantee for a satisfactory and happy life.” Similarly, thousands of miles and many centuries away from Rome, the Chinese philosopher Mencius taught: “All things are already complete in oneself. There is no greater joy than to examine oneself and be sincere.”

Secondly, a philosophical spirituality gives you a chance to participate in the divine. “The philosopher”, says Plato, “by consorting with what is ordered and divine and despite all the slanders around that say otherwise, himself becomes as divine and ordered as a human being can.”  And Marcus Aurelius says: “He lives with the gods who consistently shows them his soul, content with its lot, and performing the wishes of that divinity, that fragment of himself which Zeus has given each person to guard and guide him. In each of us this divinity is our mind and reason.” These lines mean a great deal to me.
Your favorite quote:
When on trial for his life, on charges of blasphemy and corrupting the youth, Socrates said, “The unexamined life is not worth living”. Among some professional philosophers this motto has become a kind of cliché. But there is something very serious and very correct about this assertion. A life given to thinking and reasoning and wondering about who you are, and what things in life matter most, really is better than a life of ignorance. The opposite claim, that ignorance is bliss, taken as a proposition about life, is simply false.

Your favorite web sites:
This answer may seem rather dull. When I read the internet, I mostly read news outlets, including
CBC News, BBC News, The Globe and Mail, France 24, Spiegel Online, The Guardian, and Al Jazeera.

Your hero?
Ludwig van Beethoven. I find myself enormously inspired by his will to create some of the most wonderful music in the world while at the same time suffering severe tinnitus and deafness and (later in life) cirrhosis of the liver. His hearing disability also imposed on him a profound loneliness. Yet his music also speaks of the spiritual power to be found in nature and in the human spirit. Thinking about his life sometimes just breaks my heart, but at the same time lifts it up. Beethoven could transform the most terrible physical and emotional suffering you can think of into the most beautiful art you will ever hear. If only more of us could do the same.

A spiritual lesson you hope to learn?
I’d like to learn how to follow my path without becoming an intellectual snob! It is sometimes all too easy to look down on people who are poorly informed about the world, or who hold irrational beliefs. I’d like to be better able to have productive and fruitful dialogues with such people.

A place in the world where you feel spiritually "connected?"
Naturally, I am most at home in my own mind, my own skin, and my own home. This ability to be “connected” wherever you are is of course a major teaching of just about any spiritual tradition. If I had to name one particular location, I’d choose my home town of Elora, Ontario, and the Elora Gorge conservation area. There’s a little grove at the top of one of the cliffs, overlooking some rapids, where I had what I now look back upon as my first mature spiritual experiences. I also think fondly of a few sites in Europe where certain ideas were first born in my mind, such as Loughcrew, in Meath, Ireland, and the Vogelsberg region of Hessen, Germany. But as I now live in Canada, those sites are harder for me to visit.

Posted by www.spiritualbookclub.com at 8:22 AM